Public Debt - Where are We Going?

The US Treasury has a nifty online application that tracks the Debt to the Penny since 1993. Despite the fact that the data presented is rather disheartening, I graphed the numbers to look for trends. 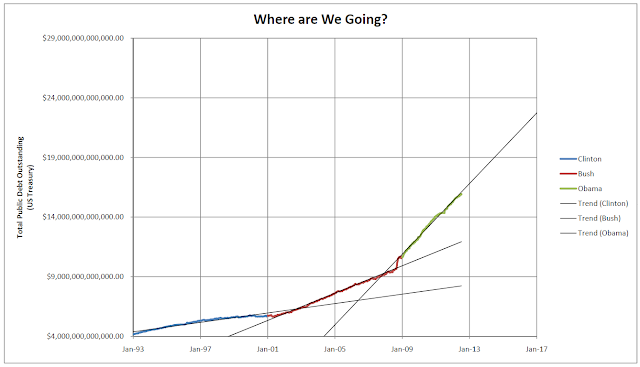 From first glance it would appear that the a linear fit is a pretty reasonable prediction of the trend per President. If this is the case we are rocketing toward $22 trillion at the end of a second Obama term. The slopes of the best fit lines are:

A friend of mine suggested I plot the Y-axis on a log scale to see how the trends from President to President track. 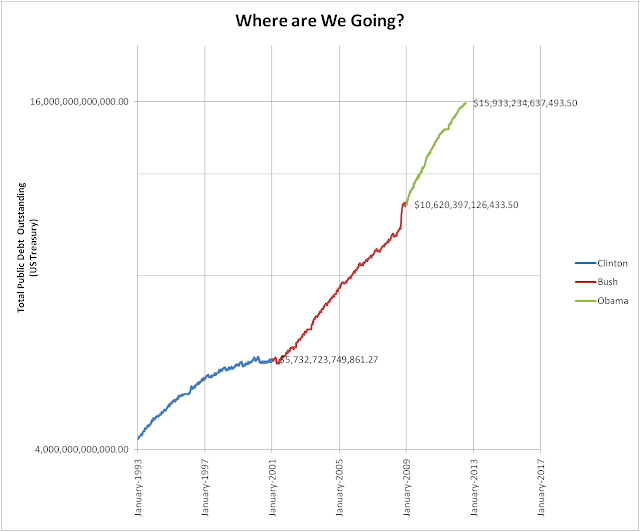 Clinton doesn't fit the 21st century trends, but from Bush to Obama the trend does seem to go exponential. Bush added quite a bit at the end of his term.

Clinton's second term is interesting, public debt seemed to be plateauing. The best fit for this is a second order polynomial, but I just can't imagine that the slope would have gone negative if he had stayed in office. I suspect having a combative Congress contributed to that trend.

Bush and Obama's curves are both pretty much exponential.  If this is the case we should expect Obama's second term (if he has one) to close with the total public debt near $27 Trillion, or roughly $81,800 per person.

With this small sample size it seems that the rate of increase of the public debt increases three-fold when a new President is elected. However since the sample size is so small this cannot be reliably predicted.

After adding in the party control of the Senate there is an interesting trend. 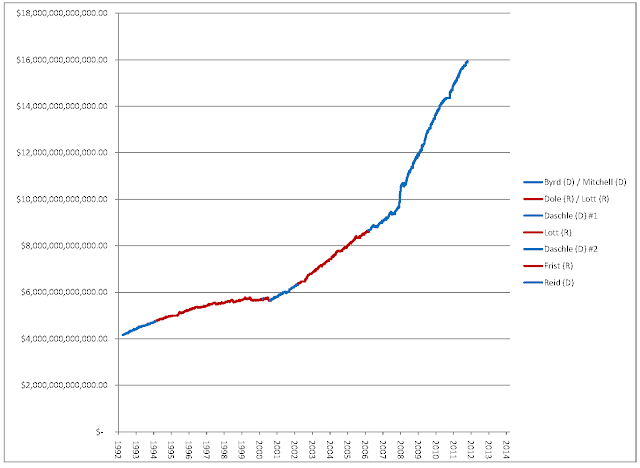 The raw data is available at the US Treasury's site: http://www.treasurydirect.gov/NP/BPDLogin?application=np. I've separated the data per President in this Google Spreadsheet..
Posted by Unknown at 4:41 PM